Here are five books I read in 2015 that I particularly liked. Expect an eclectic mix of fiction and non-fiction, and not necessarily social-sciency. Although I tend to pick those books that end up having some social science-stuff / politics in them without explicitly looking for it. That, and books about spaceships.

In Sapiens, Israeli scholar Yuval Noah Harari maps the entirety of human development. From our foraging ancestors to nuclear weapons, it’s all in there. Over the course of the book, Harari covers intriguing topics such as: Why do we cooperate? Why do humans believe in gods or nations?

From the Agrarian Revolution to the Human Rights revolution, Harari spans a compelling narrative that is always based in scientific findings. But he does not only wrap the scientific findings of others in a very readable way. Rather, he adds own insights and hypotheses to the story, sometimes with provocative (but nonetheless interesting) views. For instance when he calls the Agrarian Revolution „history’s biggest fraud:“

Although Harari often elicits a sense of wonder what humans have achieved in essentially so little time, he is also cautious and questions whether we have become an overall happier species. Even though we have more and more shiny things, this does not mean we’re overall happier now than humans 200 or 2000 years ago. Well, the insight that materialism doesn’t breed happiness isn’t exactly new. But Harari’s mix with the broader picture (and the science) of human development makes it all the more interesting to read. 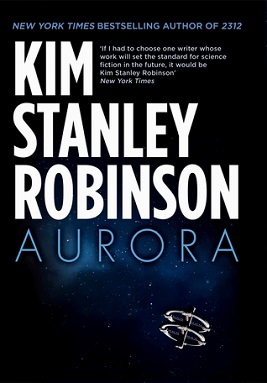 This sci-fi book by American writer Kim Stanley Robinson is the fascinating story of a generation ship on its way to the system of Tau Ceti. Since we’re dealing with a generation ship story here and Robinson is mostly a writer of hard sci-fi, we don’t encounter the usual hyperdrive / warp engine spaceships that fly around the galaxy. What makes this story interesting (and the many like it) is the scientific plausibility of the endeavor. The story starts shortly before the main characters arrive at Tau Ceti and details the events there.

Fundamentally, Robinson is very skeptical of the idea of generation ships. But whereas many other skeptics of generation ships emphasize the technical feasibility of travelling at 10% of the speed of light for hundreds of years with an uncertain outcome, Robinson adds the social problems to the picture. Oh, he throws in many technological problems as well, and, not to forget, biological hazards. But, he makes the point that conflictive human nature will be one of the main obstacles of a society of ~2000 starfarers crammed in a big, but in the end still too small, box. This is social sci-fi at its best: how would humans actually behave in such a situation?

Robinson masterfully plays through all eventualities which makes for a gripping read (I think I went through the book in two days). He has a hand for characters, which makes this even more fun. Oh and did I mention that the generation ship begins to become self-aware and ends up one as of the best characters of the book?

Oh boy, this book is so much fun. It’s about a near, dystopian future (yeah, I know, we’ve been there. But this is different.) where Earth is an environmental disaster and generally a very unpleasant place to live. So most of humanity logs into a giant online game called OASIS for distraction (think Facebook, Second Life and World of Warcraft combined). Inside this online game, the protagonist Wade Watts hunts easter eggs hidden by the game’s creator James Halliday. Anyone who finds all easter eggs first inherits Halliday’s huge fortune (Halliday is dead). But (and here is where the fun begins), Halliday was the greatest geek + 80s/90s pop culture enthusiast on earth, so his easter eggs are all hidden inside giant puzzles drawn from 80s culture, gaming, movies, music etc. In order to solve the puzzles, the reader follows Wade in becoming an expert in the 80s culture and games and solving all sorts of riddles.

I know, this doesn’t sound like much fun. But believe me it is. Just look at the enormous list of references the author (Ernest Cline) has managed to include. While this could’ve easily slid into cheesy name-dropping (at times, it does, tbh), all those references are mostly well written and make sense in the context of the plot.

If you want only one guilty pleasure read this year, make it this one. 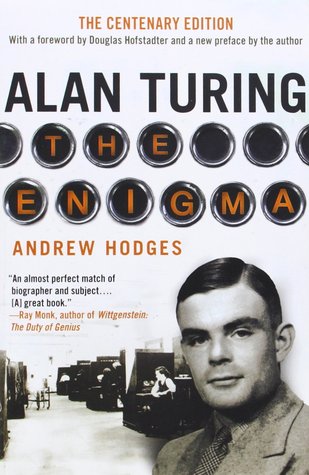 I went to see The Imitation Game last year and liked the film quite a bit. But from the reviews it quickly became clear that the movie had condensed and misrepresented several of the key events that actually happened at Bletchley Park. So I decided to pick up Andrew Hodges‘ biography on which the film is based. It’s a hefty volume and as such not an easy read to carry around in your backpack on the way to work (this was before I got my Kindle). But it’s really well worth your time, leading me to conclude on Twitter:

A.Hodges‘ Turing bio has it all: math, spies, statistics, war, love, tragedy, ciphers, AI, computer science… So much better than the film

The book sometimes delves deeply into the revolutionary concepts Turing developed early in the 20th century. If you’re the kind of reader who isn’t turned off by a little math here and there this book is for you (no it doesn’t actually involve formulas, but it does explain mathematical or logical concepts over a couple of pages). But it’s not just heavy on the concepts; Hodges brilliantly brings to life an academic who is torn between his passion for science and the societal restraints with which he had to struggle. This hand for character coupled with the deep understanding of the enormous relevance of Turing’s ideas for the coming century make this an exceptional read.

Technically, I’m still reading this one, so it’s a bit unfair to include in a book review of 2015. But since I’m about halfway through and I’ve already encountered so many interesting, thought-provoking and insightful passages, it’s well worth to be mentioned here. Political Order and Political Decay is the second volume of Francis Fukuyama’s „magnus opus“ on the Origins of Political Order. In the first volume (published in 2011) he sets out to explain where political order comes from, covering the period from early human settlements to the French revolution. From an excellent review by Sheri Berman:

Fukuyama began the first volume, “The Origins of Political Order,” which appeared in 2011, by stating that the challenge for contemporary developing countries was how to “get to Denmark” — that is, how to build prosperous, well-governed, liberal democracies. This, in turn, required understanding what “Denmark” — liberal democracy — actually involved. […] Fukuyama argued that political order was all about institutions, and that liberal democracy in particular rested on a delicate balance of three distinct features — political accountability; a strong, effective state; and the rule of law. Accountability required mechanisms for making leaders responsive to their publics, which meant regular free and fair multiparty elections. But elections alone were not enough: A true liberal democracy needed to have its institutions of accountability supplemented by a central government that could get things done and by rules and regulations that applied equally to ­everyone.

In this volume he picks up the story at the time of the French revolution, again with the basic question in mind: where does political order come from? Fukuyama might be best known as the author of the provoking „end of history“ hypothesis and his involvement with the neoconservative movement in the United States prior to the Iraq war. Yet he has since distanced himself from the neocons. In consequence, Fukuyama no longer puts out one-size-fits-all political messages, but presents a nuanced discussion of the drivers and stumbling blocks of (liberal) political order from the French Revolution until now.

He covers a lot of ground, taking the reader from case studies of the civil service in 19th century Britain, France, and Germany to state development and colonial legacies of Nigeria and Kenya, as well as to an in-depth discussion of the 19th century United States as a patrimonial and clientelistic state. Fukuyama truly makes one think when he explicitly draws comparisons between clientelism in 19th century US politics and similar problems in modern developing countries, highlighting the fact that many similarities between trajectories of political development exist between countries. Other ideas are more controversial, such as his insistence on a logical sequence between different stages of political development:

„those countries in which democracy preceded modern state building have had much greater problems achieving high-quality governance than those that inherited modern states from absolutist times.“ (p.8)

I haven’t gotten to the „Decay“ part yet. But if the first part is any indication, it should be well worth the read.

This site uses Akismet to reduce spam. Learn how your comment data is processed.