Atlanta and #allmalepanels: #isa2016 as it happened on Twitter

How did it come to this?

Before I answer that question, let me take a step back. This post started out as the third installment of a blog post series (three make a series, right?) in which I crunch numbers about Twitter usage at the Annual Convention of the International Studies Association (2014,2015). Since I’m currently in heavy dissertation writing mode, I thought I’d quickly dust off the old code, download all the tweets, produce some nice figures and be done with it, back to the dissertation. Well, it didn’t really go down like this.

This year was the first year I didn’t attend the ISA myself (dissertation writing, remember?). So other than first-hand gossip from some of colleagues I only had Twitter as my source of the hot conference topics. Since last year’s talk of the town was coffee (in a now deleted tweet by Shit Academics Say), I figured this year it would probably be Coca Cola or something like that, since the conference took place in Atlanta.

I was in for a surprise.

When I fired up R and ran the first numbers, everything looked more or less normal. I count 2023 unique Twitter users writing 8513 tweets about #isa2016. This number of Tweets is in the ballpark of last year’s 8187 tweets. (Now, many of those are retweets; the number of  original tweets, i.e. without retweets is considerably lower: 4188.)

And, yes, I also did the notorious ranking of Twitter heavy-users during ISA. The second year in a row, Dr Raul Pacheco-Vega wins with almost 600 tweets (over 200 original tweets). Unfortunately, I don’t have any official prizes to hand out. 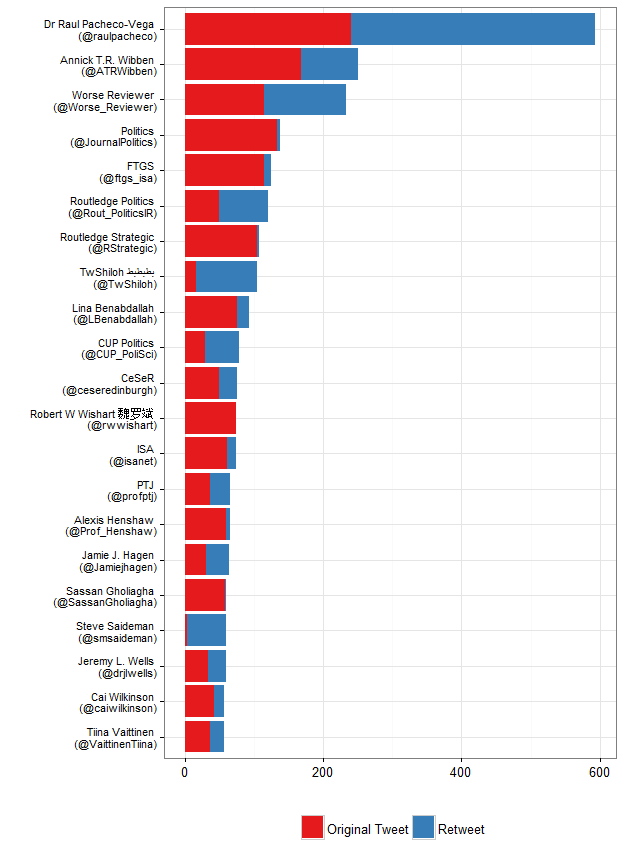 But I digress. Back on topic.

It’s usually more interesting to see what people are talking about, rather than who tweets most and when people tweet. To get an idea of the topics (Coca-Cola? MLK? Atlanta? Beer?), I ranked the most frequent hashtags.

And here it was, the surprise. A whopping 135 times “allmalepanel” shows up, leading the list of most frequent hashtags by far. Yes, you read that right. People mentioned “allmalepanel” more than the fra**ing town in which the conference took place! Wait, you say. What is an all male panel? And why are people so mad about it?

For the uninitiated, an all-male panel is exactly what it sounds like: a group of (mostly white) men plunked on stage at a conference, usually under the auspices of being the “experts” in their fields, whether that field is agrarian developments in the Sudan, developments in the music industry, advances in chemical engineering, global banking regulation, or even women’s reproductive rights.

So, basically, an all male panel is a strong indicator that someone forgot that women also know stuff. There is even a tumblr for it. And from the hashtag analysis it seems that it’s exactly these kinds of panels that was #isa2016’s most talked about topic on Twitter.

As further analysis showed, this high number of hashtags is the result of one particular tweet, that was retweeted and liked 110 times during the time under analysis (I only looked at tweets between 5 March and 21 March). Yes, you guessed right, that was Saara Särmä’s tweet I quoted in the beginning, and which is well worth repeating, because it shows the problem in all its absurd glory:

And here is the rest of the most popular tweets, at least the ten most popular (popularity is the sum of a tweet’s retweets and likes):

So, now you might say, wait a second, the second most popular tweet (Severine Autessere’s tweet about her winning the ISA best book award) was about a scholarly prize that went to a woman! That’s evidence that women are being recognized in the profession! To which I’d answer: that is the same as if one would argue that by electing Obama as the first African-American president of the United States all racial problems in the US are solved. The prize is well deserved. But it should not divert from the real issue at hand.

And let me point out that the fourth popular tweet by Kim Yi Dionne picks up the same picture as Saara Särmä’s tweet. So, technically we could add the popularity of both tweets together and arrive at a popularity count of 153, more than twice as high as the second popular tweet! (Yes, popularity might not be the best term, but for the lack of a better word, I’ll continue to use it) Also, let me emphasize that the hashtag count and popularity count is an inexact science. The hashtag count most likely underestimates the true number of tweets about all male panels, since my regex-search did not pick up when a tweet mentions “all-male panel” (with spaces and dashes in between instead of #allmalepanel). The true number is therefore likely to be higher.

What does this overwhelming reaction to this topic on Twitter tell us? First, a lot of people obviously think that gender representation at ISA is a problem. You might think that political science should do better in handling gender problems, it being a discipline that, you know, sometimes deals with issues such as justice and stuff. But you’d be wrong. The Twitter reaction to ISA’s #allmalepanels is indicative of a broader problem with gender in political science. The Duck of Minerva ran some insightful posts on the topic.

Second, the reaction highlights that conference organizers should pay attention to gender representation–not only because it’s the right thing to do, but attendees (both male and female) care! And, because they care, people might ultimately decide not to show up anymore:

People ask why I don't go to ISA.

I don’t mean to imply that ISA organizers deliberately underrepresented women on so many panels (quite the opposite, from what I’ve heard and read on Twitter, Paul Diehl did a great job as conference organizer). The problem certainly runs much deeper: there is still a massive gender gap in IR and political science. Our colleagues from the IR blog covered the issue back in 2013. Conference organizers should take away two things from this: a) pay attention to the gender composition of your panels, and b) if that leads you to the conclusion that there are too few women that could participate on a panel, address it openly, by discussing it at the conference, pointing it out in the conference program, etc.

I’ll make sure to check back next year to see what the Twitter community thinks about the issue at the ISA in Baltimore. But I’d like to leave this post on a hopeful note and will emphasize this: #starwars ranked 8th on the hashtag popularity and Andrew Heiss’ tweet about the famous Star Wars panel (which itself sparked some discussion) was the 6th popular tweet at the conference.

Seeing that Star Wars is so widely loved among ISA attendees: why don’t we follow the example of the world’s most successful science fiction franchise, which managed to include two strong female lead characters in two years in a row. If Star Wars can do it, why can’t we?*

*No, I haven’t seen Rogue One yet. But let’s say the trailer strongly suggests that the female lead will also be great.

PS: I’ve uploaded the script to replicate the analyses in this post here, if you’re only interested in the data (i.e. the tweets) you’ll find it here.

This site uses Akismet to reduce spam. Learn how your comment data is processed.